As you read in our Day One post, we had taken it pretty easy the night before in preparation for our second day at Coachella.. the day we would be seeing the one and only Lady Gaga!

However, there was no need to wait until 11:20 P.M. (Gaga’s start time) for the excitement of the day to begin; we were taking over The Charmed Comb’s Instagram story and headed to the Lucky Brand’s Desert Jam pool party! The Lucky Brand party was the catalyst of our whole trip and we were beyond excited to see Noah Cyrus perform and hang out in the VIP section! We had meticulously planned our first princess outfits, featuring The Charmed Comb wigs and handmade princess bikinis by our dear friend

Like anyone could expect, the Lucky party was filled with celebs and denim alike! We walked by massage tables, manicure stations, and drank our delicious drinks in the shaded oasis of VIP.

Apparently being dressed as Princesses garners a lot of attention. And we were fine with that. People kept asking for photos of us and it took no coordinating to drop everything and pose as soon as we were asked for one. One of our photos even ended up being the feature for OC Weekly’s photo coverage of the event! Being Ariel, Belle and Aurora definitely put us in our element and oddly enough, I think we felt more like ourselves than ever before.

But after the party is was time for the main event… Gaga! After a quick change at the hotel we headed out to the polo fields and anxiously awaited her performance. While we were waiting we stopped by for a few songs at Martin Garrix, including a surprise performance by Drake… and may have caught the Weekend and Selena Gomez making out.

We waited in the artist guest area for Gaga to perform for a good two hours, and it was well worth it. The second she came onstage we were filled with all the extra adrenaline you could imagine. Her set was filled with songs from all her albums and included things passive fans would know, and things only us die-hards would recognize. The highlight was definitely her introducing and performing her new song “The Cure,” which we bought and listened to the entire drive home that night. 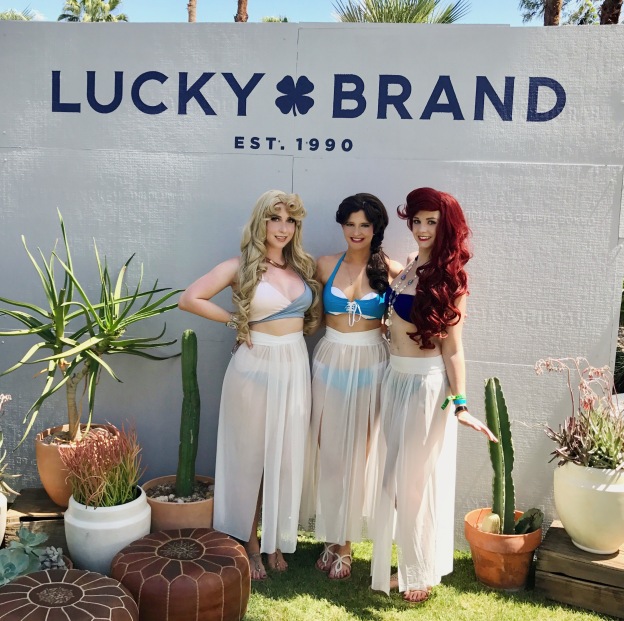 After a long night of pool parties, music, and being princesses… it was time to get some much needed sleep. After all, there was still one more day to go….

For more photos of the party check out our new friend Ed’s gallery for OC Weekly.

All wigs by The Charmed Comb, click the following links to purchase: Aurora, Ariel, Belle

* please see our disclosure page for more information about our use of affiliate links used on the site. Your clicks help us keep this blog up and running!

One thought on “Coachella Day Two: Pool Parties, Princesses in Bikinis, and Gaga”