In March I finally fulfilled a lifelong dream of traveling to Europe. I visited London, Paris and Rome and it was an incredible two weeks. There was so much to see, do, eat, drink, etc… and I had the time of my life!

Of course, since I was going to Paris…. I had to make a trip to their Disneyland.

It was insanely magical. From the moment we walked in, I knew I was officially in my element. Or course, being a Disney Parks fanatic, I had some comparisons. So if anyone is planning on hopping over the pond for a trip… here are some tips and observations!

Walt Disney Studios park is a bit less immersive than DCA or Hollywood Studios in Orlando. It’s very small and while like any Disney park it is immaculate, you don’t necessarily feel like you are on a “Disney” property. However, the rides are insane! Which I will get to a bit later….

As far as Disneyland Park goes… it is absolutely magical. It may be my favorite Magic Kingdom yet. Last year when we went to Disney World, I felt that their Magic Kingdom was a bit to sprawling. It felt less personal and more corporate. On the flip side… the OG Disneyland here in California can sometimes feel a bit too intimate with how small it is. Paris DL was the perfect in between. It felt very familiar while still feeling new. The cast members are insanely friendly, and the park is as immaculate as you would expect from a Disney property. It also isn’t nearly as busy as Disneyland or Disney World. So you really get to take your time exploring.

Does Europe have different regulations for roller coaster speeds? Because my goodness… those things go FAST! DL Paris has the good staples that we have back here in the states such as Big Thunder Mountain, Rockin’ Roller Coaster ft Aerosmith, Tower of Terror (RIP, DCA Tower… still not over it) And Space Mountain. But they are completely different than the ones we have here!

Big Thunder is much longer, faster, twistier and turnier than either the one in CA or FL. It was a blast to ride and I wish we could have gone on it over and over again.

Rockin’ Roller Coaster was a wild ride. When Anne, Autumn and I went to FL last year, we were OBSESSED with their version. But this one has it beat. The story is a little more condensed, but the actual coaster is longer and way more intense. In Paris, we rode it twice because we couldn’t get enough. The speed seemed faster and there are multiple loops and spins and turns. Its definitely a high voltage thrill ride that is not to be missed!

Tower was the same as our previous Tower at DCA, with the exception of the story being told in French, of course. What was cool though, was that the cast members working that ride kind of messed with you a bit. When it got dark in the TV room, they would creep up behind you and breathe in your ear, say “Boo”, or “Ahh” to freak you out, which made the whole experience that much more immersive. It was so great to be back in my favorite hotel for an afternoon. I miss that ride so much!

Space Mountain was unfortunately closed as they were remodeling it to HyperSpace. So I will have to take another trip to check that out!

On top of these coasters, they have an Indiana Jones coaster that is full of thrills! Unlike the CA ride, this is an outdoor thrill ride with a huge loop and lots of drops and turns. Don’t miss this one if you get to check it out!

Many of the smaller rides were the same, just told in French. It was very charming to see these beloved attractions being enjoyed by people all over the world.

But my favorite attraction was Sleeping Beauty’s castle. Oh my goodness…. Talk about gorgeous! The inside is adorned with beautiful stained glass windows, and in the dungeon… Maleficent’s Dragon awaits you. It was such an immersive walk through. I may or may not have teared up in excitement 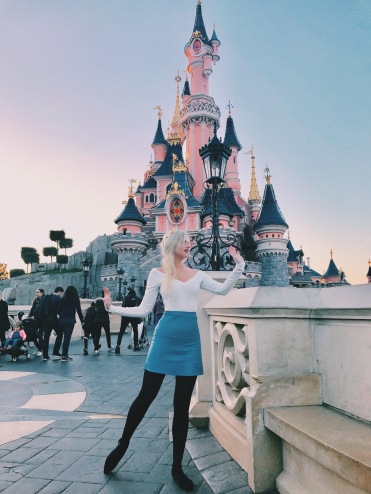 Processed with VSCO with c1 preset

If there is one thing Disney Paris falls short on, it’s their hours of operation. They were only open from 10-8 when we were there. We got there right at opening and it still wasn’t enough time to enjoy absolutely everything. We decided to forgo parades and shows in favor of rides and only see their fireworks show. It was well worth it.

If anyone knows me… you know how frequently I gush about “Disneyland Forever” the 60th anniversary fireworks show at Disneyland. I never thought anything could beat it. Until I went to Paris. Their show is an opulent display of electric lights, water, fireworks and projections that is not to be missed! I wish I had gotten photos but I was too enchanted to even pull out my phone. They just updated to their 25th anniversary fireworks, which rumor has it is even MORE stupendous. Like I said… maybe I need to plan a second trip…

As far as food goes, it’s a bit harder to find good food at this park without paying an arm and a leg. All Disney food is expensive, but they don’t have as many quick service options as we do here. Given our time constraints, we didn’t want to have long sit down meals. So we found we were pretty much limited to your typical burgers, pizza and pretzels. BUT, the big plus is that you can get wine and beer all throughout the park. We may have been a little buzzed when Jafar decided to take a photo with us.

So if you decide to make the trip to Paris and you are a Disney fan, this park is not to be missed. It has its differences, but it is insanely beautiful and so much fun! My one advice would be to try and reserve a seat at a restaurant a couple weeks beforehand so you can experience their food more than I could… because food is important.

Is Paris officially my favorite Disney park? Well… I guess I will have to visit the Asia parks before officially making that decision.